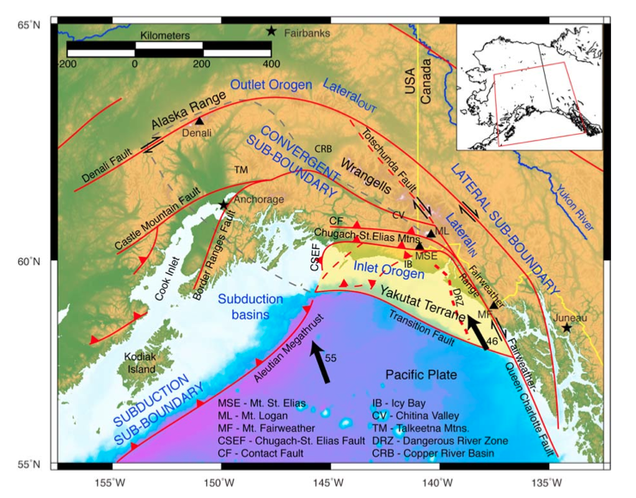 Koons and al. (2010)
The Yakutat microplate is found south of Alaska, where it is colliding and accreting onto the North American plate at a rate of 6 centimeters a year (Bruns 1983). The subduction of the Yakutat block occurs in the north-west direction and appears to be subducting beneath the continental margin (Bruns 1983). The low angle subduction has resulted in the formation of the Chugach-St. Elias orogen, a broad deformation throughout southern Alaska (Christeson 2010). The Yakutat microplate is found partly on land, with a major component offshore. The petrology of the microplate is composed of Mesozoic and Paleogene rocks, which are next to the Oligocene rocks of the Pacific plate. The Yakutat block is thought to consist of a basement of oceanic crust overlain by continental crust extending to the east (Bruns 1983). However, recent seismic data indicates the block may be composed mainly of a thick oceanic plateau, with minor amounts of continental rock accreted on the eastern portion (Christeson 2010). There is however, a consensus over fossil and petrogenesis data, which demonstrate that the Yakutat block is allochthonous (originating at a distance from its present location) (Bruns 1983).

The Yakutat microplate, is bounded in the north-east by the active Faireweather fault and its off shore extension, the Queen Charlotte fault, which are both right-lateral, strike-slip (transform) faults (Bruns 1983). The north boundary is the active Chugach-St. Elias thrust fault (Bruns 1983). To the west, the fragmented thrust faults of the Kayak Island and its off shore structures along the Kayak zone are active as well (Bruns 1983). In the south, the Transition fault slices the Yakutat block at a near vertical dip, roughly along the base of continental slope, distinguishing it from the Pacific plate. (Bruns 1983). The Transition fault is a notable structure as it displays interesting features. Previously believed to be inactive, due to lack of visible surface deformations, new data indicates the fault is indeed active (Christeson 2010). Furthermore, many models display thrusting of the Pacific plate along the Transition fault in order to form the elevated oceanic plateau. However, recent seismic data (STEEP02) indicates the fault is a strike-slip fault, with only minor thrust structures (Christeson 2010). A complete understanding of the nature of the Transition fault, may give rise to the exact origin and transport of the Yakutat micro plate.