(Dutch 2009)
The North American tectonic plate, shown above, encompasses the majority of the surface area of North America, as well as Greenland, the northern Caribbean, and parts of Siberia (Russia), Iceland, and the Azores (Portugal). (Dutch, 2009) The large plates with which it is in contact are the Eurasian, African, South American, Caribbean, Cocos, Rivera, Gorda, Juan de Fuca, Explorer, Pacific, and Okhotsk plates; as the number of neighbouring plates suggests, the North American plate is rife with tectonic activity.

The North American plate’s interactions with other plates generate various geologic features on its surface, from mountain belts to faults. A few noteworthy examples are detailed below.

For a complete map of tectonic plate boundaries and their velocities of activity, as well as of seafloor age, follow this link:
http://www.tectonics.caltech.edu/images/maps/seafloor_age.pdf
You can use it to follow along the plate boundaries as they’re described below.

To the east, the North American plate shares the Mid-Atlantic Ridge with the Eurasian plate. This divergent margin, offset throughout by transform faults, began spreading approximately 180 Ma ago, opening the North Atlantic Ocean (Kearey, 2009). Evidence of Mesozoic juvenile crust formation in New England can be correlated with the event (McHone, 1984).

Below, a video shows the simulation of a spreading ridge like the Mid-Atlantic Ridge with wax.
(Structural Geology RWTH Aachen, 2014)

Along the western border of the North American plate in a dextral transform fault lies the Pacific plate (Nicholson, 1994). Their contact is broken by several plates and microplates: Cocos, Rivera, Gorda, Juan de Fuca, and Explorer. Along with the Nazca plate to the west of the South American plate, these plates are what remain on the Earth’s surface of the Farallon plate, a section of basaltic oceanic lithosphere that has almost fully subducted beneath the plates composing North, Central and South America (Pavlis, 2012). 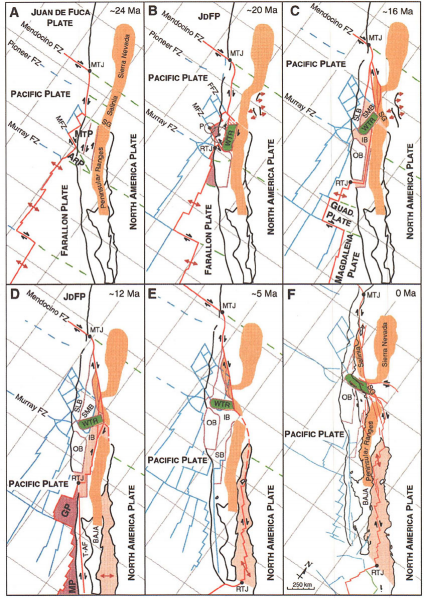 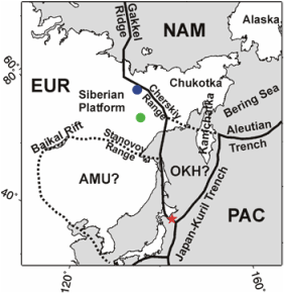 The dextral strike-slip Queen Charlotte Fault extends north of Cascadia up to Alaska (United States) (Rohr, 2000). It connects to the Aleutian Trench, a subduction zone, which runs south of Alaska into the northern margin of the Okhotsk plate towards the Chersky mountain range of eastern Siberia (Russia), as seen at right. From the Chersky Range, the North American plate boundary continues along the oceanic, divergent Gakkel Ridge, which becomes the Mid-Atlantic Ridge (Steblov, 2003).

Within the bounds of the North American plate lie several remarkable geological subprovinces. The shallow dip of the Kula plate subducting beneath the west coast of North America during the Laramide orogeny generated the Rocky Mountains far inland. (Marshak 2008) The Basin and Range Province in southwestern United States represents an area of thinned and stretched continental crust.  Tertiary highlands underwent widespread normal faulting, creating horst mountains and graben valleys.  The Basin and Range is believed to have formed from back-arc spreading, plume induced spreading, or from movements along the San Andreas Fault. (Wicander 2004) The Appalachians and Ouchita Mountains of the east coast are what remain of a series of mountain building events that began in the early Paleozoic. Collisions with other major plates and microplates uplifted the mountains to heights comparable to the present-day Himalayas. (Wicander 2004)

Oakey, Gordon N., and James A. Chalmers. "Reply to Denyszyn and Halls (this volume): Geological and geophysical observations in the Kane Basin preclude the presence of a major plate boundary in south‐western Nares Strait." Journal of Geophysical Research: Solid Earth (2013).