The Cocos Plate is a relatively small sized, triangular-shaped oceanic plate located just west of Mexico and the Caribbean.  This plate is bound by the North-American and Caribbean Plates to the north-east, the small Rivera Plate to the north-west, the Pacific Plate to the west, and the Nazca Plate to the south (Fig 1).  The major tectonic processes occurring to this plate include the subduction underneath the North-American and Caribbean Plates represented by the Middle America Subduction Zone (MASZ), and divergent spreading centers along the Pacific Plate and Nazca Plate boundaries (with elements of transform motion along these boundaries as well). (Meschede and Barckhausen 2000)

The formation of the Cocos Plate resulted from the breakup of the Farallon Plate at approximately 23 Ma (caused by the East Pacific Rise) when it split creating the Cocos Plate and the larger Nazca Plate to the south of the spreading center.  (Manea et al. 2013). 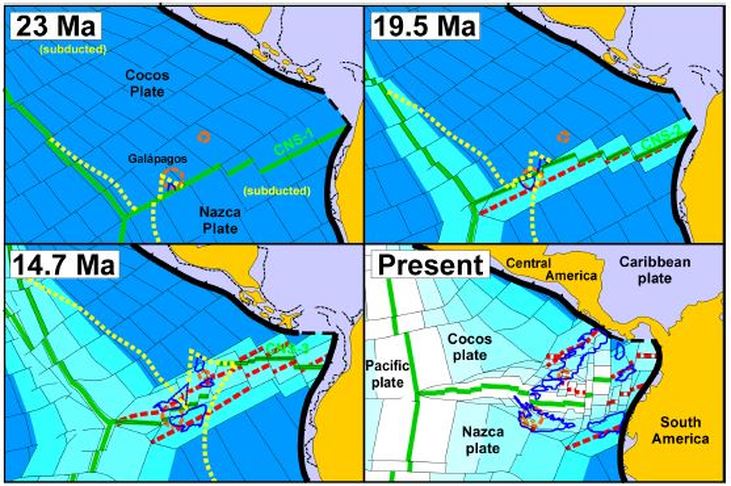 The Rivera plate is a “microplate” that fragmented from the Cocos Plate around 10 Ma (Fig 3.).  Similarly to the Cocos Plate, this plate subducts under the North American Plate along the Middle America Subduction Zone at a rate of approximately 30mm/yr.  Its other major plate boundary is to the west which forms a spreading center with the Pacific Plate.  The majority of the Rivera Plate is composed of undisturbed oceanic crust, with only some regions that are structurally complex. (Manea et al. 2013) 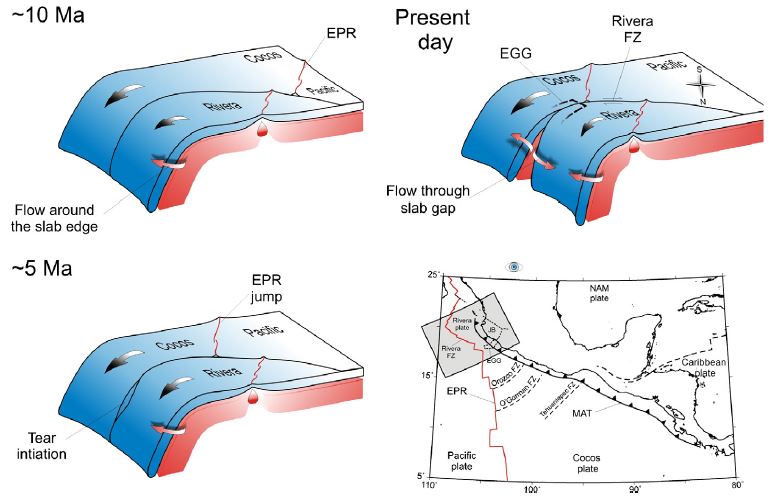 The most complex region of the Cocos Plate is the MASZ which has several strange features including its unusual slab geometry (flat slab subduction vs steep subduction) and its varying subduction rates and peculiar volcanism.  The oceanic Cocos Plate subducts under both continental and oceanic crust at rates of 50-90mm/yr depending on the location along the MASZ (the subduction rate increases going southeast).  The age of the Cocos Plate being subducted also increases going southeast along the MASZ, but the age then decreases near the end of the margin (starts at 10 Ma and increases to 25 Ma near Guatemala, then decreases to 15 Ma near Costa Rica).  The steepness of the subduction varies significantly along its strike, changing from very steeply dipping subduction to flat-slab subduction in a relatively small distance.  This flat-slab subduction is not very well understood and its formation is highly debated. (Manea et al. 2013)

Some special features of Cocos Plate include fracture zones on the surface of the northern section of the plate, likely created by the Clarion transform fault (early border between Rivera and Cocos Plates) (Manea et al. 2013).  Dougherty et al. 2012 suggest these fracture zones are the beginning of the fragmentation of the Cocos Plate into 2 new north-south plates.  On the southern part of the Cocos Plate is the Cocos Ridge, which is a 2km high structure subducting orthogonally to the strike of the MASZ (Fig 5).   Another feature is the Panama fracture zone which is produced by the intersection of the Nacza-Cocos boundary being subducted underneath the MASZ.  This produces a slab window, a tectonic feature created when a divergent mid ocean ridge meets a subduction zone (Manea et al. 2013).  There is also a lot of hotspot volcanism along the Cocos-Nazca divergent plate boundary; the largest producer of these hotspots being the Galapagos hotspot (Sadofsky et al. 2009).  Seamounts are also characteristic of the Cocos Plate morphology, some being subducted and remaining intact during subduction leading to low magnitude seismic events.  (Manea et al. 2013) 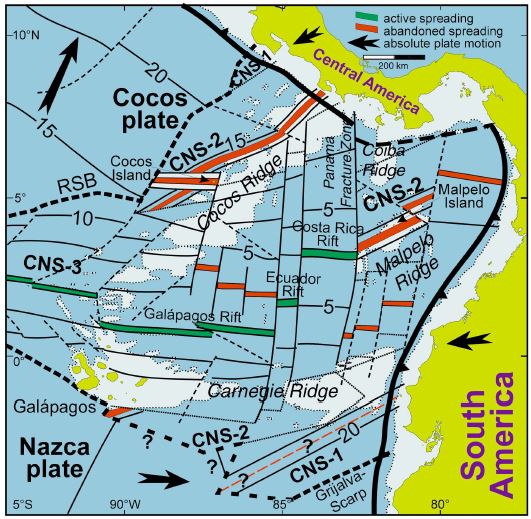 Fig. 5: The Cocos Ridge (diagonal shape in the middle of image) subducting orthogonaly into the MASZ (Meschede and Barckhausen 2000)
References Cited